The Mission MeerKATcartoon series, produced by Jive Media Africa, explains how radio astronomy works and why this pathfinder telescope is being built in the Karoo. 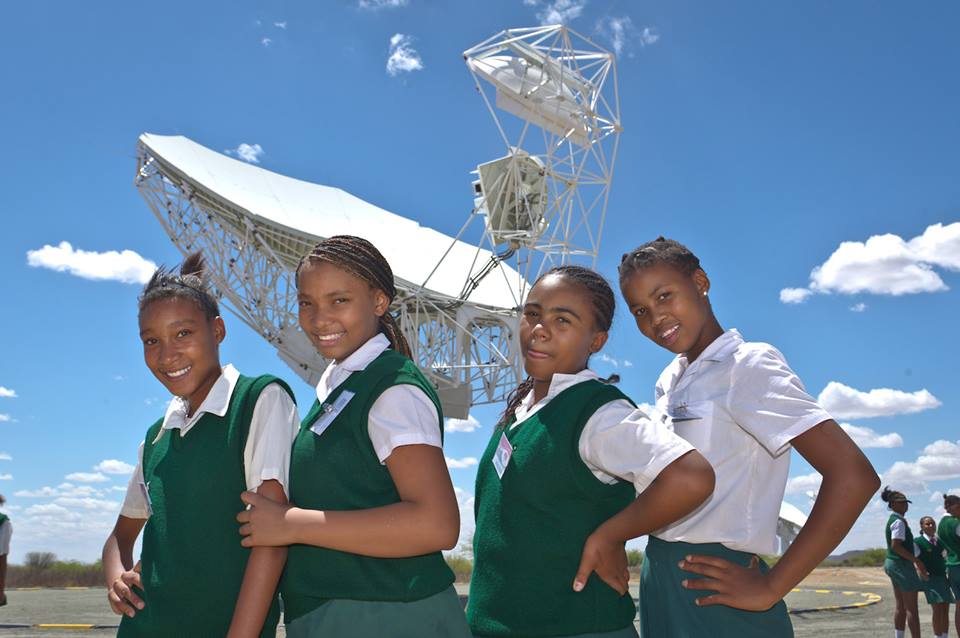 The Square Kilometre Array (SKA), developer of the world’s largest radio telescope, in partnership with Jive Media Africa recently engaged learners in Carnarvon in the Northern Cape through the Hip Hop Science Spaza programme. Grade 6 and 7 learners from Carnarvon Primary School were treated to hands-on science activities through which they learned more about the SKA, radio telescopes and astronomy. The activities included the creation of art focused on the theme of astronomy and the electromagnetic spectrum, a visit to the site of the MeerKAT telescope and an international Skype session that allowed the learners in Carnarvon to engage with learners at the Jodrell Bank telescope in the United Kingdom. Through the Science Spaza Hip Hop initiative, the SKA and Jive Media Afica then hosted an awesome collaboration with learners, scientists and popular music artist, iFani, putting on a show to engage the Carnarvon community all about radio astronomy and the ‪‎SKA through the power of music! Following the event, the songs were packaged along with interviews from the scientists and musicians for community radio stations to share even more widely.

Science Spaza is a science engagement initiative of Jive Media Africa to improve science literacy by bringing curriculum-linked science to disadvantaged schools around the country. Science Spaza has established a network of science clubs throughout the country, supported with appropriate resources and tools, encouraging learners to engage in fun and interactive science, and to support educators in the teaching of science in an enjoyable manner. To find out more visit www.sciencespaza.org

The project’s purpose is to enable young people to engage with health research, and in this project specifically research around water and water-related disease. This will be done by firstly mentoring the science clubs on research methodologies and research ethics. And secondly, then to undertake one of three research projects on water-related disease in their own communities. Upon completion of these research projects, the clubs will turn their new knowledge into hip hop and rap songs with a prominent Hip Hop artist which will then be performed for their communities, recorded and filmed for wider distribution.

This initiative has been made possible through The Wellcome Trust’s International Engagement Award. The Wellcome Trust is a global charitable foundation dedicated to achieving extraordinary improvements in health by supporting the brightest minds.

SAMA award winning rap artist, iFani, jetted into Durban on Saturday, 19 July 2014 for a music event with a difference – the Hip Hop Science Spaza! The BAT Centre (Durban) was the laboratory in which hip hop and science were combined to boost science education with the addition of a little rap.

Grade 10 – 12 learners from Chesterville and Umlazi engaged in practical science activities and then turned new knowledge into rap songs. The event culminated in a hip hop battle for the best science rap. The surprise ingredient was iFani, the hottest name in SA Rap who this year won a SAMA for best rap album and who is incidentally also a computer scientist.

Being the International Year of Crystallography, the workshop started with a lesson delivered by Dr Sphamandla Sithebe, an organic chemistry researcher and lecturer at the University of KwaZulu-Natal.

To screams of surprise and delight, iFani arrived on Saturday morning ahead of the local battle. He spent an hour with the stunned learners giving them performance tips and talking to them about his journey from humble beginnings to stardom – answering personal questions about his career as a scientist and musician, as well as his grandmother, Mama Mthembu, who raised him as a single parent and passed away in 2010.

“iFani means ‘not the same’ and Science Spaza is presenting science information in new ways. We’re excited to be collaborating with iFani to bring science to the people – it’s a great partnership.” said Robert Inglis, Director of Jive Media Africa and co-founder of the Science Spaza initiative.

This year celebrates the International Year of Crystallography, 100 years since the discovery of X-Ray crystallography – an advance that allowed scientists to see the crystal structure of molecules. Crystallography is a wide-ranging discipline, which impacts on nearly every field of science and technology.

The Jive team with iFani

What are your options as a young scientist in South Africa? GET – SET – GO is an exciting and accessible guide to Science, Engineering and Technology (SET) careers and opportunities.

Jive Media Africa is proud to have worked with the South Africa Agency for Science and Technology Advancement (SAASTA) to complete the design and layout of this important publication aimed at high school learners.

SAASTAs intention was to produce a publication containing comprehensive information on careers and study opportunities in the fields of SET in South Africa, with an emphasis on areas experiencing skills shortages and the grand challenges facing the science, engineering and innovation system.

” Thanks, Jive Media for an excellent and very attractive careers publication.

I believe it will serve a good purpose in creating awareness of careers in the science sector, as well as excitement about the possibilities. The end product really exceeded my expectations. ” Ina Roos, Editor, Corporate Communication: South African Agency for Science and Technology Advancement (SAASTA)

What a week it has been for Science Spaza, a Jive Media Africa initiative!!

National Science Week kicked off with a great launch at the Royal Show Grounds (Pietermaritzburg). High schools and educators from the uMgungundlovu District Municipality were present including Qoqisizwe High School, Masijabule High School, Mazwendoda Senior Secondary, Bhekiximba High School, Umthonqotho Comprehensive High School and Gobindlovu High School. Science Spaza reached out to approximately 400 learners in what was a truly fulfilling experience for all parties involved: the learners, educators and the Science Spaza team. Everyone enjoyed hands-on activities on Paleontology, Astronomy, Traditional Knowledge, SA Invention, Marine Biosciences and Working Together for Water. The day would not have been complete without the distinguished guest speakers, Mr Shadrack Mkansi of SAASTA, Mr Irshad Motala of the KZN Department of Education, Prof Albert Modi of UKZN and Mr Robert Inglis who both directors of Jive Media Africa. In addition, the Master of Ceremonies Mr Ntokozo Shezi of FameLab 2013 inspired and enthralled the audience. Thank you to our sponsors, namely: The Department of Science & Technology and National Research Foundation/South African Agency for Science and Technology Advancement.

When you’re looking for refreshment – where do you go? Pop in at your local Science Spaza and pick up some knowledge – for mahala! Science Spaza is for everyone – you’re never too young or too old to learn. Discover things you never knew but use every day! Do amazing science with hands on activities and get hold of awesome comics, activities and more.

What is Science Spaza?
Science Spaza is an exciting, fun and interactive science learning experience. It brings curriculum-linked science to disadvantaged schools around South Africa.

What it offers
South Africa lags far behind other countries when it comes to maths and science education. The lack of resources and the lack of opportunity for experiential learning is, in part, responsible for this state of affairs. With this in mind, Science Spaza provides teachers and learners with resources and guidance.

Each worksheet includes fun and exciting activities, an experiment/ demonstration which can be done with found objects, explanations and curriculum links. These resources are available on the Science Spaza website and can be printed and distributed where possible.
Science Spaza also provides suggestions, support and tools for setting up your own science club in your school or community. Science clubs and schools can register with Science Spaza to receive updates and additional resources – and from time to time the chance to participate in competitions and other initiatives.

Science Spaza – Because Knowledge is Ncah!

If you want to get involved in sponsoring Science Spaza’s, please contact us via http://www.sciencespaza.org

Jive Media Africa has just completed a series of posters with accompanying educator and learner guides for PEN (Public engagement with Nanotechnology) through SAASTA/ NRF.

A mobile open-source exhibition for the International Year of Astronomy!
Downloadable 10m banner for you to print and exhibit (Client: SAASTA)

Making the universe everyone’s to explore.

We’re bringing the universe closer to ordinary South Africans. Jive Media has produced a 10m long banner with the stunning images from deep space that are usually only available to those with internet access. It has been printed across the country and is hanging in various locations such as the Zoo in Pretoria, Science Centres, etc.

This banner showcases space to the general public. Large, high resolution images of near and deep space will showcase phenomenon such as nebulae, supernovas, globular clusters and galaxies, in all their brilliance. Images of our sun, earth and moon as many have never seen them before, as well as the planets in our solar system, are also showcased.

Jive Media Africa completed a tour around South Africa visiting the prehistory sites that have shaped world knowledge on the evolution of life – and more recently human life – on our planet. These palaeontological and archaeological sites create a wonderful opportunity to share science with the public. They take us back to humankind’s African Origins.

Jive Media Africa produced 3 books about the sites, specifically a learner guide, a tourism guide and portfolio of research activities.
Nonhlanhla Vilakazi, a palaeo-herpitologist (studies fossilized reptiles), came along for the ride and recorded her experiences (in words, images and video clips) on a weblog.