“I always jump at any opportunity to talk about my work, but I didn’t know how to get into science communication. Then I attended a FameLab training. I think I’ve found my calling! I want to talk to people about science for the rest of my life.” END_OF_DOCUMENT_TOKEN_TO_BE_REPLACED

The University of the Witwatersrand (Wits) is hosting FameLab SA for the first time this year!

Jive Media Africa was privileged to work with 17 researchers from a wide range of faculties and departments to enhance their science communication skills prior to the Wits FameLab SA heat. Wits’ participation in the heat demonstrates their commitment to taking science into public spaces, and we are excited to welcome them to the FameLab family.

The session was very interactive and prompted lots of discussion and debate about the role of science in society, and how to find the right amount of detail for a public talk.

Feedback from the group was that Jive’s training was useful, fun and boosted their confidence and ability to communicate their research with people outside of their field or within the public. Participants will compete against each other for the opportunity to represent Wits at the FameLab SA semi-finals, and ultimately to represent South Africa on an international stage.

Find out more – or register for FameLab SA at www.britishcouncil.org.za/famelab

Researchers at Wits practice their communication skills ahead of competing in the FameLab SA competition.

FameLab ® is an initiative of the Cheltenham Festivals. The British Council in collaboration with the South African Agency for Science and Technology Advancement (SAASTA) and Jive Media Africa deliver the FameLab competition in South Africa. Find out more about FameLab South Africa at www.britishcouncil.org.za/famelab

FameLab 2017 successfully rolled-out in Pretoria last week in partnership with UNISA and the CSIR.

On Tuesday, Jive Media Africa trained post-graduate students at UNISA in Science Communication and Media Skills ahead of the UNISA FameLab Heat on 3 March 2017.

The CSIR hosted a successful second heat of FameLab on Wednesday, following the launch of the 2017 competition at Science Forum South Africa in December last year. Congratulations to Tshepo Makgoba who won the heat! He will be going through to the Masterclass training and the semi-finals.

FameLab, one of the biggest science communication competitions in the world, is helping South African scientists and engineers improve their communication skills. By supporting them to clearly explain their science to the public, they are helping to narrow the gap between science and the society in which it is at work.

YOU can get involved in the international FameLab competition here: www.britishcouncil.org.za/famelab.

FameLab ® is an initiative of the Cheltenham Festivals. The British Council in collaboration with the South African Agency for Science and Technology Advancement (SAASTA) and Jive Media Africa deliver the FameLab competition in South Africa. Find out more about FameLab South Africa at www.britishcouncil.org.za/famelab

We are bringing you exciting news…FameLab SA 2014 is around the corner. If you are studying or working in Science, Technology, Engineering or Mathematics, have a passion for what you do and are between the ages of 21 and 35 then FameLab is for you.

FameLab is an international talking science competition running in over 23 countries around the world. Participants have three minutes to engage the attention of a public audience.

By entering the competition you can improve your profile as a scientist and meet other scientists from all disciplines in one fun event. You also stand a chance to win an amazing cash prize and get international science communication training from some of the world’s best science communicators.

FameLab made its debut in South Africa for the first time in 2013 and we anticipate an even bigger and better competition in 2014.

FameLab gives you the opportunity to contribute to your community by becoming a role model in science.

There’s a heat available near you!

The winner wins a chance to compete against the worlds best from more than 23 countries at the FameLab final in the UK in June 2014.

We look forward to the excitement FameLab 2014 will bring.
See you there!

Watch this space for registration details…

We held an excellent stakeholder session of FameLab SA (www.britishcouncil.org.za/famelab) on Thursday 08 August 2013 in Sandton, Johannesburg. This meeting included partners, judges, and finalists of FameLab 2013.

What has been so exciting is the way this initiative has brought diverse groups together around science communication. We’re looking to build on our partnerships as we move towards FameLab 2014!

Here’s a video roundup of the journey of the 2013 competition. 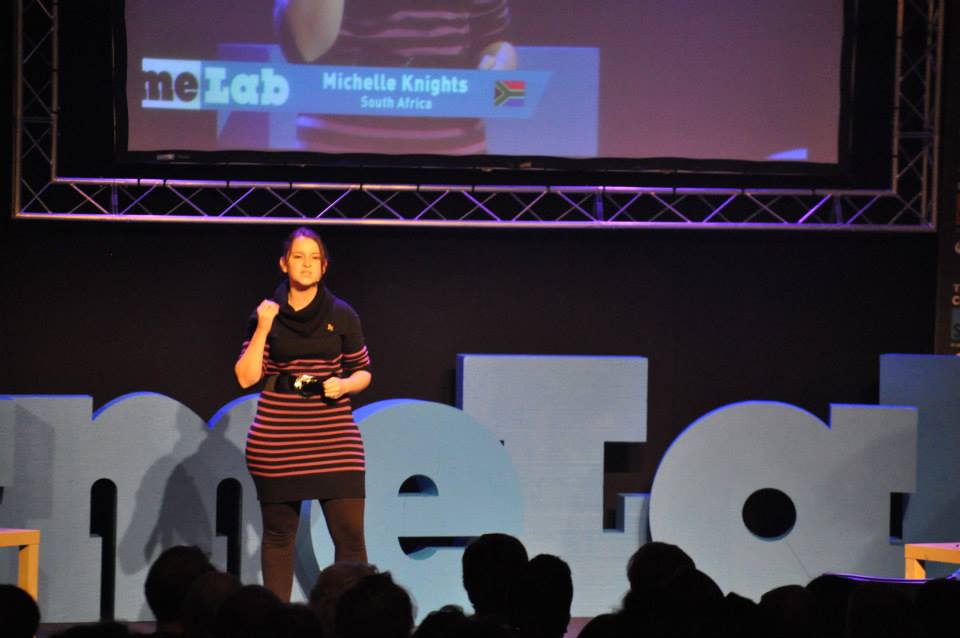 Michelle Knights, currently completing her PhD in Cosmology at UCT, is making history as the first EVER FameLab South African winner. She jetted off to the UK early this month (June 2013) to represent South Africa in the International FameLab competition and she made it all the way to the International final which took place on the 6th June 2013 in Cheltenham. South Africa is definitely proud of Michelle!

Michelle Knights intrigued the judges with her presentation on the use of pulsars to demonstrate gravitational waves (an Einstein hypothesis). Only ten countries out of twenty-one made it through to the final, and Michelle earned her place. She was accompanied by Remo Chipatiso from the British Council SA and Robert Inglis of Jive Media Africa, organisers of FameLab SA.

The International FameLab winner title went to Fergus McAuliffe from Ireland who’s talk was on the wood frog and how it blurred the lines between life and death by freezing solid each winter and returning to life each spring. Congratulations to Fergus and to all who participated in the competition. Michelle Knights has put South African science on the map and raised the profile of science communication. We wish her all the best for the future.

Sincere thanks to the British Council in South Africa and to the whole team at Jive Media Africa. We are also hugely grateful to all our partners and sponsors in South Africa including SAASTA, SANSA and the CSIR.

To connect with FameLab in South Africa visit www.britishcouncil.org.za/famelab